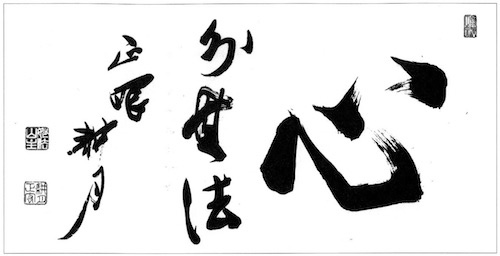 The Shin-Jin-No-Mei (Chin. Xinxin Ming), the inscription on belief in the mind, is one of the oldest traditional texts of Zen / Chan Buddhism and is refreshingly straightforward and more up-to-date than ever. It was written by Master Kochi Sosan (Chin. Seng – Tsan) the successor of Eka, who in turn was the successor of Bodhidharma, the 1st Patriarch, the Indian monk who brought Zen (Chan) to China. 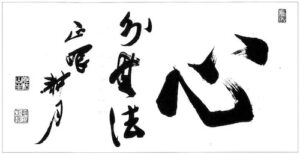 There is no Dharma apart from Mind, from Zen Word, Zen Calligraphy, text by Eido Tai Shimano, calligraphy by Kogetsu Tani. Available from Shambhala Publications, Inc.

The Perfect Way knows no difficulties.
Except that it refuses to make preferences;

Only when freed from hate and love,
It reveals itself fully and without disguise;
A tenth of an inch’s difference,
And heaven and earth are set apart;
If you wish to see it before your own eyes,
Have no fixed thoughts either for or against it.

To set up what you like against what you dislike—
This is the disease of the mind:
When the deep meaning of the Way is not understood
Peace of mind is disturbed to no purpose.

The Way is perfect like unto vast space,
With nothing wanting, nothing superfluous:
It is indeed due to making choice
That its suchness is lost sight of.

Pursue not the outer entanglements,
Dwell not in the inner void;
Be serene in the oneness of things,
And dualism vanishes by itself. 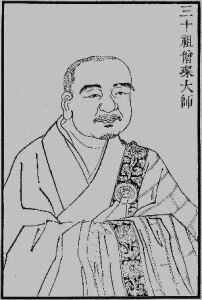 When you strive to gain quiescence by stopping motion,
The quiescence thus gained is ever in motion;
As long as you tarry in the dualism,
How can you realize oneness?

When we return to the root, we gain the meaning;
When we pursue external objects, we lose the reason.
The moment we are enlightened within,
We go beyond the voidness of a world confronting us. 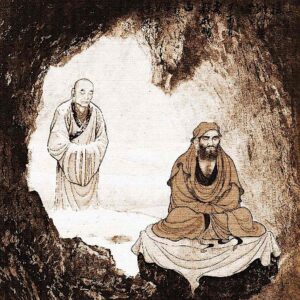 Transformations going on in an empty world which confronts us
Appear real all because of Ignorance:
Try not to seek after the true,
Only cease to cherish opinions.

Abide not with dualism,
Carefully avoid pursuing it;
As soon as you have right and wrong,
Confusion ensues, and Mind is lost.

The two exist because of the One,
But hold not even to this One;
When a mind is not disturbed,
The ten thousand things offer no offense. 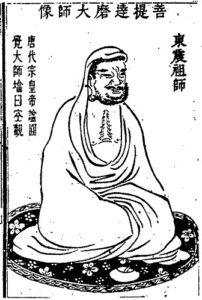 The object is an object for the subject,
The subject is a subject for the object:
Know that the relativity of the two
Rests ultimately on one Emptiness.

In one Emptiness the two are not distinguished,
And each contains in itself all the ten thousand things:
When no discrimination is made between this and that,
How can a one-sided and prejudiced view arise?

The Great Way is calm and large-hearted,
For it, nothing is easy, nothing is hard;
Small views are irresolute,
The more in haste the tardier they go.

Clinging is never kept within bounds
It is sure to go the wrong way;
Quit it, and things follow their own courses,
While the Essence neither departs nor abides.